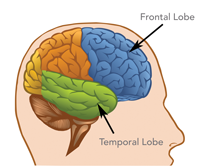 Frontotemporal dementia (FTD) is a cluster of conditions resulting from the progressive degeneration of the frontal and temporal lobes of the brain.  FTD affects personality significantly, usually resulting in a decline in social skills, coupled with emotional apathy.  The emotional deficits are extremely problematic and include lack of concern for a loved one’s illness, cruelty to children, animals and the elderly, lack of concern when others are sad, rude comments, loss of respect for intrapersonal space, socially inappropriate behaviors, and diminished response to pain. Repetition, indifference to boredom, perseveration and focus on unimportant issues are some of the behaviors of patients with FTD.  Unlike other types of dementia, FTD typically results in behavior and personality changes manifesting before memory loss and speech problems.  It is more common than Alzheimer’s in people younger than 60 years old.

This website uses cookies to improve your experience while you navigate through the website. Out of these, the cookies that are categorized as necessary are stored on your browser as they are essential for the working of basic functionalities of the website. We also use third-party cookies that help us analyze and understand how you use this website. These cookies will be stored in your browser only with your consent. You also have the option to opt-out of these cookies. But opting out of some of these cookies may affect your browsing experience.
Necessary Always Enabled
Necessary cookies are absolutely essential for the website to function properly. This category only includes cookies that ensures basic functionalities and security features of the website. These cookies do not store any personal information.
Non-necessary
Any cookies that may not be particularly necessary for the website to function and is used specifically to collect user personal data via analytics, ads, other embedded contents are termed as non-necessary cookies. It is mandatory to procure user consent prior to running these cookies on your website.
SAVE & ACCEPT